Home » Paul Kane, A Man who has the Key to Boot up the Web

You might raise your eyebrows, if I tell a tech fact. Yes, seven individuals spread in the world with the secret key and if those keys get combined, they’ll get a master key which has the power to reset the internet. Do you doubt with this tech surprise? This is not a scene in an upcoming novel but a real tech stuff to handle any cyber security crisis. Let me tell you some more details about this trendy tech matter and through this post you can meet one of the most powerful men who have a key to shut down the internet.

Paul Kane, a business person who is chief executive of CommunityDNS, British Technology firm, holds one of the 7 keys that have ability of rebooting the internet when a terrorist attack or any terrible event on the web. He is the father of two young sons who lives in Bath, Somerset. Last year, a prestigious Institute of Engineering and technology (IET) Ambrose Fleming medal was awarded for his creative contribution in computer networking field during the last 25 years. 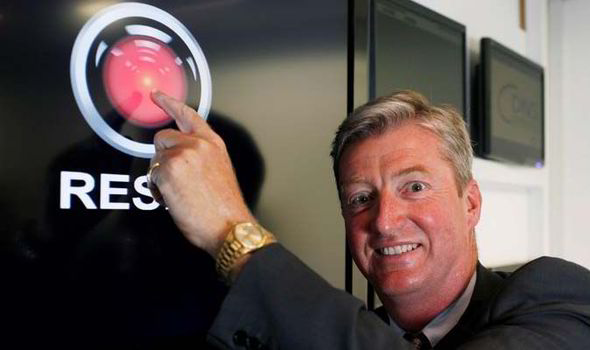 In the year 2010, he was selected for five-year role to handle the websites using high-tech cryptographic keys and issued with a key to restart the web. He kept his secret key at a secured location in England and now he had allowed cameras in his office for some reasons.  Actually, he can’t shut down the entire internet but he organizes the control at the heart of the web.

Totally there are seven mythical key masters across the globe having the secret keys and at least 5 of those should get joined to regenerate a new key to reset the World Wide Web. Actually, the secret keys are swipe cards with a fragment of security code. In case of any major disaster, Paul and other key holders would meet in a secure location in United Sates and use their swipe cards (credit card style keys) to reboot the security system of internet. These 7 individuals have 14 child keys which are refreshed once in 6 months to keep the data up-to-date. Once in a year, these key holders must send the special secret phrase with the picture of their smart card to DNSSEC so as to make sure that they haven’t lost their key card.

Even though professional hackers and cyber terrorists are high tech experts, certain security systems cannot be defeated by them as they’ve created and upholding by innovative authorities. Paul Kane and other key masters are such specialists and part of an organization called ICANN (Internet Corporation for assigned names and numbers). Everyone keeps a metal key for a safety box which contains a smartcard to active a machine in order to generate new controlling key to defend the web under critical circumstances.

Paul Kane holds a master key to unlock the web if it is brought down by extremists or cyber criminals. He and other selected experts would fly to a secret place and use their furtive keys to protect the internet security system. He is in UK and other key holders are from the countries like Burkina Faso, Trinidad and Tobago, US, China, Canada and the Czech Republic but their identities are kept secret forever.

I hope you’ve well engaged with this tech news and let me know your valuable insights through comment.

Paul Kane, A Man who has the Key to Boot up the Web was last modified: June 19th, 2017 by Atish Ranjan
TagsPaul Kane who can restart the internet